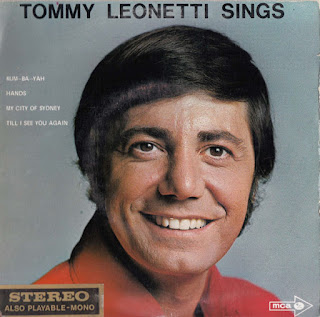 Anyone who lived in Sydney during the 60’s and 70’s would surely remember the days when the television stations did the nightly close-down. Unlike today when you can watch TV all through the night, sometime between 10.30pm and midnight each channel did their own particular close-down and from then until the next morning all you got was a test signal on the screen.

The ABC (Channel Two) played ‘Advance Australia Fair’ – I cannot recall what Channel Nine or Ten did – but who from that time does not recall the wonderful entertainer Tommy Leonetti singing ‘My City of Sydney’ at the end of the night’s broadcasting on Channel Seven ?

As a backdrop to the song there is a clip of Tommy wandering around Sydney and along the beaches – now this was filmed back in the very early 70’s so you do notice a huge difference in the Sydney skyline; the hydrofoils, the old ferries, there’s no Centrepoint Tower and even the Opera House is still in it’s final stage of construction…

The bikini’s on the girls, the cars, the fashions of the day. The absence of all those five star hotels, the Australia Square building dominating the skyline.  Back then you drove over the Harbour Bridge – only the bridge workers walked over it and I would bet that if the camera had lingered long enough on the bridge you would see Paul Hogan working as a rigger there somewhere.

Tommy Leonetti was actually an American entertainer who came to Australia and quickly became a favourite with audiences on TV (The Tommy Leonetti Show) and around the clubs as a singer. He had a wonderful voice and during his TV show endeared himself to his colleagues for his habit of missing camera cues and forgetting his lines and did you know that Gary McDonald based his character ‘Norman Gunston’ on Tommy’s endearingly clumsy style of interviewing…? but it was as a singer in front of a live audience that Tommy was at his best.
Posted by Deutros at 07:45