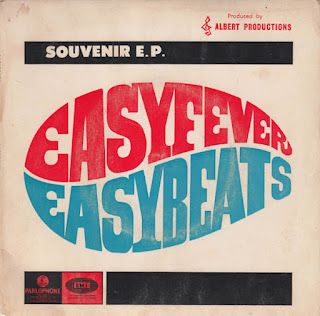 In early 1966, while the group were still touring Australia, their manager, Mike Vaughan, flew to New York City to attempt to secure an American recording contract for the band. Despite an initial lack of interest, Vaughan was able to convince United Artists Records to sign the band. Just before relocating to London in 1966, they recorded a farewell TV special for the Seven Network, titled The Easybeats, more commonly known as The Coca-Cola Special), one of the few surviving appearances from the band's career during this period. The group left for the UK on 10 July 1966.

In August 1966, Albert Productions released an E.P. of material recorded before the group left Australia. Titled Easyfever, it reach #1 on the Australian singles charts. Albert Productions then released an entire album of material titled Volume 3 on 3 November 1966. This too was a commercial success and its lead single "Sorry" topped the Australian charts.
Posted by Deutros at 07:05

Email ThisBlogThis!Share to TwitterShare to FacebookShare to Pinterest
Labels: Easybeats