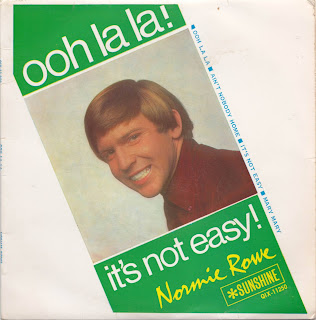 As Normie Rowe was the most popular solo performer in Australia he decide to try his luck overseas, so in August 1966 he left for the UK. In preparation, he revamped the line-up his backing band "the Playboys". Several members opted to stay in Australia for family reasons, so Rowe replaced them with bassist Brian Peacock and guitarist Rod Stone, both from the ex-New Zealand band The Librettos, which had recently split.

Arriving in London ahead of his band, Rowe engaged one Ritchie Yorke as his London agent and began to record with producers Trevor Kennedy and John Carter, using the cream of London's session musicians, including Big Jim Sullivan, Jimmy Page, John Paul Jones, famed drummer Clem Cattini, and vocal group The Breakaways. The sessions produced several strong new recordings including "Ooh La La", "It's Not Easy", "Mary Mary", "Turn On The Love Light" and "Can't Do Without Your Love". Despite his absence in London, Rowe's run of chart success in Australia continued—his next single, "Ooh La La" / "Ain't Nobody Home" (Nov. 1966) was another double-sided hit in Melbourne and a Top 5 hit in most capitals, reaching #2 in Sydney, and #4 in Brisbane and Adelaide.

Up to this time there was no national pop chart in Australia, with most pop radio stations and newspapers in state capitals and major cities publishing their own competing charts. However, on 5 October 1966 Go-Set magazine, which had been launched in February, began publishing its first weekly national Top 40, compiled by Ed Nimmervoll. "Ooh La La" / "Mary, Mary" debuted at #6 on the new Go-Set chart on 7 December 1966, and reached #1 in the 21 December chart, hence becoming Rowe's first official national #1 hit. It stayed at #1 for two weeks before being briefly supplanted by The Easybeats' "Friday On My Mind" on 4 January, but returned to the top for the next two weeks.

While "Ooh La La" was at #1 in Australia, Rowe's next single, the ballad "It's Not Easy" was also climbing the chart. It debuted at #17 in the Go-Set chart in the last week of December 1966,[ and reached the Top 10 in the second week of January. Through the end of January and into February, Rowe achieved a 'first' for an Australian popular recording artist by having two of the top three singles simultaneously for three consecutive weeks. Rowe worked in England for ten months and toured with acts including Julie Driscoll, Brian Auger & The Trinity, The Spencer Davis Group, Kiki Dee, Gene Pitney and The Troggs. High hopes were held for a British breakthrough, and in the early months of 1967 the pages of Go-Set featured predictions of his imminent UK stardom, though it never materialised.

The new Playboys lineup arrived in London in December; Normie flew home for Christmas, which coincided with the release of "It's Not Easy" / "Mary Mary", and he returned to England in January. In March 1967 the group embarked on a tour of the UK supporting The Troggs, Gene Pitney and Sounds Incorporated. The same month, Phil Blackmore left the group for family reasons and returned to Australia; he was replaced by English organist Trevor Griffin. Rod Stone left in mid-1967 (returning to Australia, after which he joined band The Groove) and he was replaced by former Adam Faith sideman Mick Rogers. At the end of 1966, Normie Rowe was voted Australia's best male singer in the inaugural Go-Set Pop Poll. 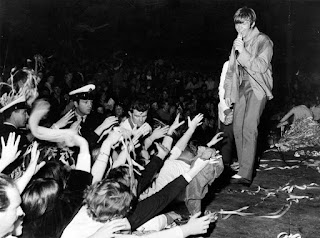 Meanwhile, The Playboys secured a one-off single deal with Andrew Loog Oldham's Immediate Records label, releasing the single "Sad" / "Black Sheep RIP" in August. Written by Brian Peacock, "Sad" is now considered a 'freakbeat' classic and has been widely anthologised, appearing on the British collection Chocolate Soup For Diabetics Vol III, Raven Records' Kicks and Rhino's Nuggets II. In June, Normie Rowe & The Playboys travelled to North America, supporting Roy Orbison on a US tour, and alongside with The Seekers he represented Australia in performance at Expo '67 in Montreal. He returned to Australia in July, where he appeared as a special guest at the national finals of the 1967 Hoadley's Battle of the Sounds.

Rowe had more national chart success in late 1967 with the Graham Gouldman song "Going Home" (b/w "I Don't Care") -- assumed to be about the Vietnam War, but really about a migrant's return to Australia from Britain—which debuted at #22 in the Go-Set chart in late April and stayed in the national Top Ten until the end of May, peaking at #7 in the second week of May. "Sunshine Secret" / "But I Know", and another single, "Turn Down Day" charted in Melbourne. But in September 1967 any questions about his career future were dramatically stalled when he received his call-up notice for national service.