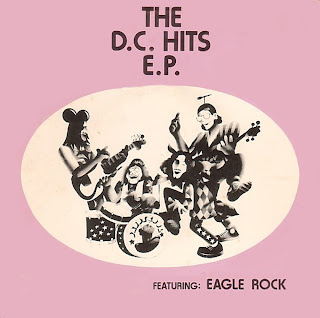 
In late 1970 Daddy Cool burst onto the scene in Melbourne, Australia, delivering a vibrant upbeat mix of blues, doo wop & crazy mixed up retro rock, via underground rock music events at the T F Much Ballroom (Cathedral Hall) & by summer’s end were primed for sellout shows at the Melbourne Town Hall. Witnessing the happy mayhem firsthand producer Robie Porter signed them to his Sparmac indie label, cut an album in 2.5 days & took it back to his hometown Los Angeles for mixing. The first single ‘Eagle Rock’ b/w ‘Bom Bom’ was a sensation spending 11 straight weeks at No.1 on the national Top 40 singles chart with both tracks getting massive airplay. Their album ‘Daddy Who? Daddy Cool’ also hit No.1 & became the highest selling Australian artist rock album to that time (60,000 copies) in an era when Gold = 10,000. DC’s success led to ARIA rewriting the rules & now it takes 35,000 sales in Oz to achieve Gold Album status. By Sept 1971 Daddy Cool had played in LA, scored an international deal with Warner-Reprise Records, & at year’s end was on the road touring the US with labelmates Fleetwood Mac & Deep Purple

Back in Oz they continued to have hits with ‘Come Back Again’ & the ‘Lollipop’ EP. The 2nd album ‘Sex, Dope & Rock&Roll:Teenage Heaven’ in early 1972 spawned controversy & yet another classic single ‘Hi Honey Ho’. A 3rd US tour in support of the renamed ‘Teenage Heaven’ on Reprise found them grooving with Captain Beefheart, Little Feat, REO Speedwagon, Linda Rondstat, Ten Years After & Earth-Wind-&-Fire and consolidating new audiences in LA & the mid-west. Then suddenly it was all over. Tour pressure, lack of empathy with US management, tall poppy syndrome in Oz, whatever…Wilson pulled the plug & in August 1972 the band played a final concert at their birthplace Cathedral Hall. Recorded & released in 1973 as the magnificent double album ‘The Last Drive-In Movie Show’ its arguably the best OzRock live album ever (with the worst cover!).

Desiring to put a less retro combo together Wilson & Hannaford formed Mighty Kong who recorded one highly regarded album then promptly disbanded. By this time Wilson had begun mentoring & championing the group who was to become the Next Big Thing, smashing DC’s sales records & taking Aussie music to a new level. We’re talking about Skyhooks, whose Ross Wilson produced debut album ‘Living In The 70s’, was released in late 1974 & went on to sell 250,000 within 12 months – a phenomenal figure for that time.

DC were lured back on stage at the 3rd Sunbury Rock Festival in 1974 & stuck around for another year enduring lineup changes & infighting with their record company & releasing a mere 2 new singles before calling it quits again. Wilson went on to produce 2 more mega successful Skyhooks albums, Hannaford began a long love affair with his Reggae muse, while Young & Duncan hit a rockabilly groove with Hot Dog & later the Rocking Emus. Gary Young filled the drum chair with Jo Jo Zep & The Falcons in the late 70s & early 80s as Wilson fronted the equally popular Mondo Rock. In other words they were BUSY pretty much til the end of the 80s & fended off the many requests for a DC reformation until around 1993 when Shirl & Greg from Skyhooks approached DC about a double bill arena tour. It sounded pretty good & both bands entered the studio & started cutting tracks for albums to go with the tour. A double single was released but didn’t get much action causing the tour promoters to downgrade the tour to smaller venues which didn’t please either of the acts & so the dream bill evaporated & the 7 completed DC tracks were shelved

Fast forward to Boxing Day 2004 & the Sth E Asian Tsunami disaster. Alan Howe, editor of the Sunday Herald-Sun newspaper, called DC about headlining a benefit concert at the Myer Music Bowl. Playing to over 10,000 peeps suddenly Daddy Cool was back with great reviews & footage which lead to a 5hr ‘history of’ DVD ‘The Complete Daddy Cool’ (Aztec International) released in Nov 2005. There was also a new recording ‘The Christmas Bug’ cut for charity & boppin’ & funny & swingin’ as hard as ever.
Posted by Deutros at 13:42