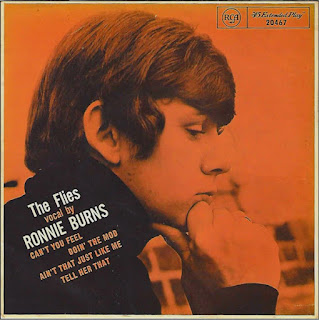 The Flies were the first Aussie band to consciously ape The Beatles. The band supported The Rolling Stones on their first Australian tour and released a number of singles; Tell Her That (July 1964), Doin’ The Mod (July 1965) and Can’t You Feel (September 1965).

Doin' The Mod charted in June-July 1965 #23 Melbourne and was followed onto the Melbourne charts in September-October by Can't You Feel, an original song by Ronnie Burns and John Thomas of The Flies (#26 Melbourne). 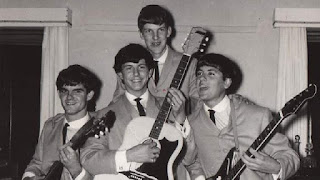 Vocalist Ronnie Burns left The Flies in August 1965 to go solo and spent the rest of the decade vying with Normie Rowe and Merv Benton as the most popular solo singer on the Australian pop scene.

He was replaced in the band by Peter Nicol, who had previously been with a group called The Wild Colonials.

The band called it a day in 1966 with Nicol returning to The Wild Colonials.
Posted by Deutros at 13:01

Email ThisBlogThis!Share to TwitterShare to FacebookShare to Pinterest
Labels: Flies