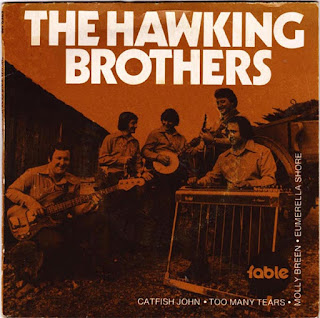 The Hawking Brothers, were an Australian country music band, formed in 1955 and disbanded in 1985. They comprised brothers Russell (1931–1976) and Alan (1933–1988). Excellent singers and instrumentalists, they first recorded in 1955 and were equally proficient with both traditional Australian folk music and country music. In the latter genre they very deservedly had a big hit in Australia with the American song Catfish John (on their self-titled album). They toured North America in 1975 and appeared at the Grand Ole Opry. After originally recording with Regal Zonophone Records, they went on to record a number of albums with RCA Records. When it comes to winning awards, The Hawking Brothers have been very successful, winning 6 Golden Guitars. In 1989, The Hawking Brothers were inducted into the Australian Roll of Renown.