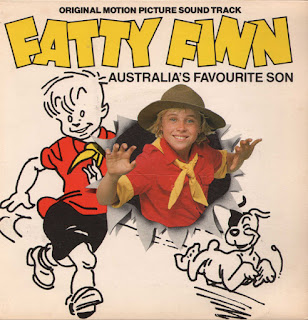 
Fatty Finn, is a popular long-run Australian comic strip, was created in the early 1920s by Syd Nicholls. The strip was initially called Fat and His Friends and was first published in the Sunday News on 16 September 1923. Fat appeared as a Billy Bunterish almost bald, nasty schoolboy, complete with straw boater. Fat was usually the butt of his friend's jokes, with those early strips exhibiting much of the cruelty practiced by children and reflecting a school system which believed in corporal punishment. On August 1924 the title of the strip was changed to Fatty Finn, heralding a change in the strip's direction and the role of the main character, who evolved from an English boy lookalike into a knockabout schoolboy innocently living out his days in a never-never urban world. Over the next few years, Fatty gradually lost weight, gained a boy scout style uniform, a dog ('Pal'), a goat ('Hector') and permanent supporting characters including Headlights Hogan, Lolly Legs, Bruiser and Mr. Claffey the policeman. Fatty adopted a more heroic role and the comic moved closer to the standard 'kid' strip with a distinct Australian flavor.

In 1980 the strip was adapted into a feature film, Fatty Finn, directed by Maurice Murphy. The film grossed $1,064,000 at the box office in Australia and was nominated for seven Australian Film Institute Awards in 1981, including Best Original Music Score, which it won. The movie starred Bert Newton, Lorraine Bayly, Gerard Kennedy, Noni Hazlehurst and Ben Oxenbould who later played the character "Ben" in the sitcom, Hey Dad..!

Rory O’Donoghue & Grahame Bond penned the songs for the Soundtrack and the EP was released in 1980 on Polydor Records - apparently without the consent of O’Donoghue and Bond. O’Donoghue’s parents, Terence and Sybil O’Donoghue, who were with D’Oyly Carte Opera in London, both sing on the soundtrack. (Thanks to Ozzie Music Man for the EP and the Bio)
Posted by Deutros at 01:19