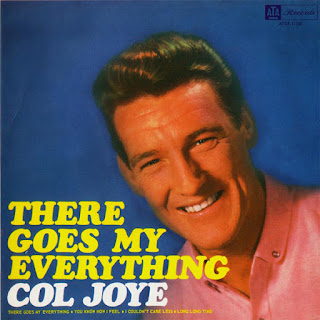 At the age of 14 he left school and began working as a jewellery salesman. In 1957 together with his brothers Kevin and Keith and others they started playing rock and roll at dances and cinemas in Sydney. They formed a band and named it KJ Quintet, they secured a regular gig at a hotel in Maroubra. Entrepreneur Bill McColl soon offered them a spot playing on his ‘Jazzorama’ concert in October 1957, and the band changed their name to Col Joye and the Joy Boys.

They signed a contract with Festival Records and produced their first hit single ‘Bye Bye Baby’ which hit the charts in March 1959.Col Joye and the Joy Boys’ third great success, ‘Oh Yeah Uh Huh’, released in October 1959, was the first rock song recorded and produced in Australia to become a national number one pop hit. The song is remembered for its unusual backing, the beat provided by the sound of a typewriter.

By 1963 Col Joye had released 20 singles, 24 EPs and 19 LPs and his popularity was such that two full time staff were required to cope with all the fan mail. The rise of the Beatles from 1963 meant that Joye waited until 1973 before another number one hit, his ballad ‘Heaven is my woman’s love’.

In 1966 Col Joye and his brother Kevin built up a strong business in artist management and publishing – the record label ATA. As managers they helped form the careers of Little Pattie and Judy Stone, discovered the Bee Gees, and encouraged Barry Gibb’s songwriting.

Thanks to Sunny
Posted by Deutros at 01:25