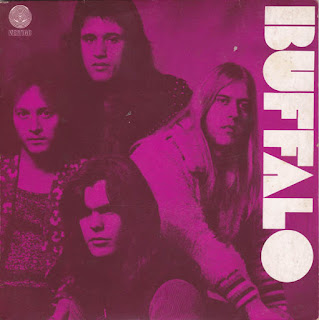 
Buffalo were an Australian rock band formed in August 1971 by founding mainstay Dave Tice on lead vocals (ex-Head). Fellow founders, also from Head, were Paul Balbi on drums, John Baxter on guitar, and Peter Wells on bass guitar; together with Alan Milano on lead vocals (ex-Mandala). Milano left after their debut album, Dead Forever... (June 1972), and Balbi was replaced on drums by Jimmy Economou. Their next two albums, Volcanic Rock (July 1973) and Only Want You For Your Body (June 1974), were also issued by Vertigo Records. After 1975 line-up changes resulted in a more commercial sound and the group disbanded in March 1977. Australian musicologist, Ian McFarlane, noted that there was "nothing subtle about Buffalo's primal, heavyweight sound, but it was delivered with a great deal of conviction ... combining the dense, occult riffing ... with the progressive blues chops ... the band certainly captured the arrogant disposition of the times in a bold and thunderous fashion". Alongside Billy Thorpe & The Aztecs and Blackfeather, Buffalo pioneered Australia's heavy metal, pub rock and alternative rock movements. Peter Wells died on 27 March 2006, aged 58.
Posted by Deutros at 04:08

Email ThisBlogThis!Share to TwitterShare to FacebookShare to Pinterest
Labels: Buffalo