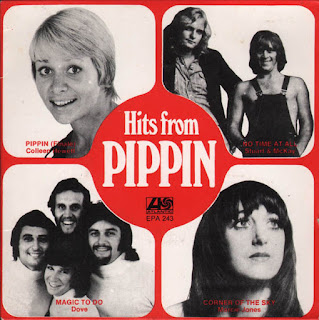 Pippin is a 1972 musical with music and lyrics by Stephen Schwartz and a book by Roger O. Hirson. Bob Fosse, who directed the original Broadway production, also contributed to the libretto. The musical uses the premise of a mysterious performance troupe, led by a Leading Player, to tell the story of Pippin, a young prince on his search for meaning and significance.

The protagonist Pippin and his father Charlemagne are characters derived from two real-life individuals of the early Middle Ages, though the plot is fictional and presents no historical accuracy regarding either. The show was partially financed by Motown Records. As of April 2019, the original run of Pippin is the 36th longest-running Broadway show.

The original Australian production (a replica of the Broadway production) opened in February 1974 at Her Majesty's Theatre in Melbourne. It starred John Farnham as Pippin, with Ronne Arnold as the Leading Player, Colleen Hewett as Catherine, Nancye Hayes as Fastrada, David Ravenswood as Charles and Jenny Howard as Berthe.[18] The production transferred to Her Majesty's Theatre in Sydney in August 1974.[19] A cast album was released.

In 1973, Ian Stuart & Ken McKay charted in Brisbane & Perth with "Hey Billy", a song based on a photo seen in “Time” by Ken. Reviews compared Stuart & McKay to the U.S band "America”.. They released two albums “Playing Up” and “Never Is Forever” plus five singles. Both men are no longer with us.

Marcie’s career started out as a teenager with The Thunderbirds in the early ‘60s. She then went on to perform with Normie Rowe and The Playboys and had many appearances on the popular TV segment ‘The Go-Show’. In the late ‘60s It was Normie who suggested she team up with the Cook sisters from Brisbane, who were already performing as ‘The Cookies’. With the attention of The Twilights Manager Garry Spry, Marcie and The Cookies were signed to E.M.I and went on to record in the studio. Though, it was the demand for session work on tracks such as ‘Something’s Got a Hold on Me’ and Russell Morris’ ‘The Real Thing’ that they are most recognized for today.


Dove was a Melbourne quartet that formed in 1970 and released several singles and three albums 1973-76. Their lead vocalist was Sharyn Cambridge. In 1981 she released an EP with The Colin Who Band.

Email ThisBlogThis!Share to TwitterShare to FacebookShare to Pinterest
Labels: Hits from Pippin, Various